I always love it when I stumble on a new book or series that I thoroughly enjoy. This latest "addiction" comes in the form of a children's series called The Keys to the Kingdom by Garth Nix. The first book in the series is called Mister Monday. At first the books struck me with a curiosity. Lately I've been seeing the series everywhere. First I was unpacking several new books that arrived at work and there was one of the books. Next I was at the Borders and there was the newest book on display staring at me. I also came across it while checking in books at work and mentally placed it on my "must read" list. Well I finally checked the book out to read it, with all these little hints popping up I was afraid the book might attack me and force me to read it! I started it on my lunch hour at work on Friday and I had it done by Friday night. I could not put the book down!
One of the hallmarks to a great storyteller, and therefore a great story, is how the reader responds while reading the story. If the reader becomes engrossed with the story and clearly loses interest in the world around her, then it is obviously a really good story. This is how I was with this book. This is the first time I read a Garth Nix book though I am familiar with his other works more in passing than in actual experience. I know he is a very awarded author and respected in his field. I can see why. Mister Monday is a fantasy novel so those who aren't particularly keen on fantasy should look elsewhere.

I find that I stumble while trying to describe the book so I'll be brief and do my best. Arthur is the main character. He is an asthmatic seventh grader who is having a very bad day. While he is suffering a asthma attack, two strange men appear and give Arthur a key shaped like a minute hand of a clock, which both saves his life and puts him in great danger. After receiving the Key he is chased by weird people, sees a even weirder house and eventually ends up in an exceptionally weird world. This weird world turns out to be the records keepers for all of creation built by the Architect to keep records of what going on in the Secondary Realms (such as Arthur's). However, since the Architect is absent, the place is pretty much a mess and everyone is interfering with the Secondary Realms and making them a mess too. Arthur's job is to straighten everything out and see that the Will of the Architect is to executed. Does he do it? You need to read to find out. The age listing for the book is 5th to 8th graders. There's plenty of action and excitement. Those with sharp eyes for mythology will see many hints of it throughout the book. The sequel to this book is Grim Tuesday.

My personal thoughts of the book: I enjoyed it. I love any book that refuses to let me put it down to do other things (such as sleep or eat). There can be times when the book feels jumbled and you have to go back to reread what just happened but all in all I felt the book stood strong as an opening to a series. It laid the foundation for how Arthur's world works (since it is close but not entirely like our world) and laid the foundation for how the parallel world he visits also works. It introduced us to characters that will become more prominent as the series moves on and it laid a good foundation on who Arthur is. Arthur as a character is flawed but likable, though I can't help but feel there is still a lot that the reader doesn't know about him. In this book his major flaw, his asthma, is such a dominating force that other aspects of his character tend to get lost or forgotten about. It is the same with the other characters, there is one aspect about them that outshines all else. However, this also can be a strength when a reader or writer has such a large cast of characters to work with, this magnifying of on part of them makes it easier to trace the characters through the story. All in all I give the book 5 out of 5 stars. (I'm off to go get the rest of the series tomorrow!)
Posted by Mic at 10:42 PM 2 comments:

I uploaded some pics to the photo album of the Soleil tank top in progress. I just finished the lace part and now I am working on the decreases to shape the waist. Can't wait to see how this turns out.
Posted by Mic at 6:24 PM No comments:

I love to knit. It relaxes me like nothing else. So, I'll post a little about what I'm knitting. Currently, it's Soleil from Knitty.com. I just finished the lace part of the tank. The yarn I'm using is SWTC Oasis. It's a wonderful soysilk yarn in a very pretty sapphire blue color. I'm looking forward to this when it's done, hopefully by summer since I'm a slow knitter. I'll have to post photos of it in progress.
Posted by Mic at 12:08 AM No comments: 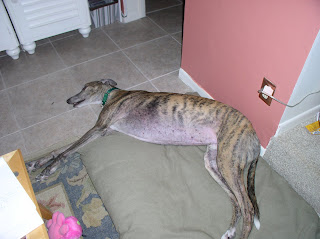 I have two greyhounds. The older one is named Betty and she's 12.5 years old. She's a brat but I love her. I adopted her just before her 10th birthday. She's a retired racer and a retired brood (she has several litters of puppies out there). I met one of her puppies! He's a real sweet boy. I'll eventually post pics of them. My newest aquistition is Dugan. He turned 9 this past December and he's a real sweet boy, just full of life. While Betty is the serious one Dugan is the clown. He's always doing something that makes me smile. Betty has quite a way with him as well! She'll boss him around like nothing else! Particularly who gets which dog bed! Stay tune for pics!
Posted by Mic at 12:07 AM No comments:

Mic
I like knitting, sewing, cooking and just generally being crafty! I'm a geek-girl at heart and proud of it!