Confessions of a Pagan Nun by Kate Horsley 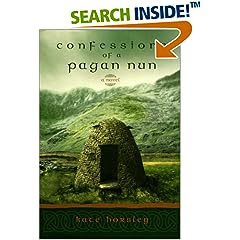 I just finished Confessions of a Pagan Nun by Kate Horsley this morning. This is one of those interesting books that must be read with an open mind. The story's setting is Ireland during the Dark Ages (around 500 CE) as pagan ways were giving way to Christianity. The "pagan nun" in the story is Gwynneve, a girl raised as a pagan, trained as a druid and later turns into a nun with near-saintly status, much like the story of St. Brigit, which is the patron saint of the convent were Gwynneve lives. The story is double-folded, first it's a memoir of Gwynneve's life and upbringing and second tells of the events in the convent that lead to a unfortunate ending. It is also a love story and a story of world in transition, where two religions meet and inevitably one religion must give way to another.
What makes the book compelling is that it is a story of a very bright, intelligent woman who sees the world through both sides of the glass and is confused and vexed by it. On one side she understands the pagan ways and why they are important to the people of the land. On the other side she sees the need for change and wonders about this new religion. Her task at the convent if coping manuscripts from around the world and she often has running theology debates with the manuscripts writers. I think that Gwynneve's strength comes from that she understands so much more that she is given credited for. Her debates usually rage why the old ways can't coexist with the new ways and why there is so much hostility between the two groups. Towards the end of the novel you feel she is setting up the scene for Ireland's long history of "Troubles" where Christians fight Christians, upper class fights the lower class and many people suffer. By the end of the novel she has traveled her land and been many things to many people, including a wife to the man she loves, mother to the needy and comforter of the sick and dying. However, it is the Christians who she lives and calls her home that turn on her and brand her as a witch. In the end, Gwynneve, a pagan nun, is martyred by Christians as her story lives on through those who truly knew her kind deeds and she is often revered as an almost saint in the abbey she lived in. The story is both poetic and lyrical yet straight forward. I found myself agreeing often with Gwynneve over theology debates and how sad it is to see the worlds clash like they do. I think in the end, Gwynneve found herself the victim of knowing too much and not being afraid to teach all who would listen. And like so many times knowledge is power and there will always be people who wish to strip that power from you and dehumanize you. I will leave this post with one of many truths that Gwynneve found in her life: It is not that ignorance is bliss. It is that ignorance opens the door for one to become enslaved by another and never realize that they are being mistreated. It is up to teachers to free people's minds and allow them to realize all that they can be. "The truth will inevitably cause tremors in those who cling to power without honoring justice."

My impressions (or not just leaving this post yet): Why I liked this book is that I see myself in Gwynneve. I understand what it means to straddle two worlds. While I study literature, it is impossible for me not to take on parts of stories and find myself hiding within the lines of the work. I am every story I read and have written. But I also must live in the "real world" where I work and interact with others who don't have my unique views. I'm not religious nor do I consider myself a Christian or any other religion for that matter. But I was raised one and understand their history and the history of the world as it has come to be. So, I can easily see myself sitting next to Gwynneve at the dawn of a new era and understanding why words hold so much power over her. I can see how her heart aches for something spiritual and yet only truly half-believing that there is something else in this world. She is a liar like me. And yet, I hope I too possess such an inner strength that Gwynneve shows. 4 out of 5 stars.
Posted by Mic at 5:09 PM

This sounds fascinating - I'm going to look it up immediately - thanks!

Mic
I like knitting, sewing, cooking and just generally being crafty! I'm a geek-girl at heart and proud of it!